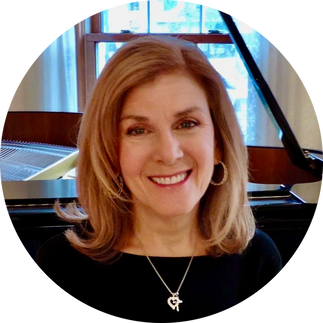 Sincere and transparent are words that describe Michele Wagner.  She writes songs about hope from God. Michele is a nationally known contemporary Christian recording artist who grew up in Cleveland, Ohio.  She received her Bachelor’s in Music Education, with a major in voice and a minor in piano from The Ohio State University in 1983.

She moved to Nashville, Tennessee in 1984 to begin her music career.  She was signed as a staff songwriter with Meadowgreen Music Publishers in 1985.  In 1989 the Benson Music Group signed Michele to a recording contract and she released her self-titled debut in 1989.  Christian Research Report, a national music journal, named Michele as the country's best new artist that year.

Michele's first, self-titled album, and her second album, A Heart That's Free contained four number one national hits, and her third album, entitled Safe Place, was named by Pulse Magazine as one of the 10 best Christian albums in 1992.  Michele was selected to be the vocalist for the nation's largest National Day of Prayer observance held in Cleveland, Ohio in 1992. CBS television stated in their evening broadcast, "Michele Wagner had those attending the observance enraptured.”

CBS requested that Michele be the talent for the only major network TV advertisement for the 1993 observance.  The ad was produced around the chorus of Michele's song, "I Will Pray for You."  Her fourth released album, Heart of the Journey, included her first music video, which was viewed on Z-TV.  The title song, "Heart of the Journey," was the theme song for the 1994 National Acteen Convention held in Birmingham where Michele was the guest artist, and was featured on the ACTS Cable Network's, "Faith and Values" program.

Michele's songs on her CD, "A Miracle of Hope", are described by Michele as "intimate and reflective personal prayers" that invite the listener on a healing journey with Lord.  “Passionate and worshipful", these 14 songs reveal God’s truth amidst our own weakness and brokenness. These songs can allow you to experience God’s embracing love for you.

Michele’s “Blind Now I See” CD contains nine songs written directly from God’s
Word and her “Out of The Overflow” a fresh production of four new songs and two reproduced classics.

Michele also digitized her first album (1984) “Higher Than Mine”.  These are her first songs she composed after Jesus became Lord of her life.

Michele states that her songwriting is a "natural overflow of her walk with the Lord."  The listener will notice a theme of hope for a broken-hearted world.  Her songs communicate that one's self-worth and value can only be found in Christ.  Michele's ministry objective is to write and sing songs of hope to broken and wounded hearts and tell them they are healed and freed forever only through the love of Christ.  All her songs invite the listener into a worshipful experience where lives are renewed, and minds transformed through hearing the truth and love of Jesus Christ.  You can find her new songs on her website.
Michele, her husband Gregg reside in Broadview Heights, Ohio and attend Cuyahoga Valley Church where Gregg is the Administrative Pastor and Michele ministers in music.  Their son Chris and his wife Whitney live in Raleigh, NC where Chris works as Sending Director at The Summit Church and Whitney teaches first-grade at Thales Academy and serves in the Children’s Ministry at Summit.

Growing up in Cleveland, Ohio, our family did not talk a lot about God.  We did attend an Episcopal church --St Christopher’s—situated by the River.  We went to church out of habit because it seemed the ’right thing to do’. From a worldly perspective, everything appeared wonderful. I was given much: my own horse, piano lessons, ballet and drama lessons etc., but home life wasn’t always peaceful. Love was confusing.  I struggled with my own self worth and had insecurities and the need for affirmation from others.

As I grew up, I was young and curious.  I knew about God intellectually but not personally. I didn’t know Him as my friend.  One morning at a church service when I was 10 years old, the verses in the sermon spoke to me.  They were Revelation 3:20 and Romans 10:9-10. I sensed the Lord knocking at my heart and after kneeling and praying to the Lord to believe, I experienced an incredible peace and truly felt different. I was changed.  I simply believed Christ died for me, that nothing I did earned my salvation. It was a deeply emotional experience that I wouldn’t forget.

Even though I accepted Jesus as my Savior that day, it didn’t seem to impact my life spiritually. I needed spiritual guidance but I didn’t have believing Christian family, friends, or a Bible believing church or youth group to help. Unfortunately, I focused my energies on others for my affirmation and self worth. I was the consummate people pleaser. Life was unfulfilling and purposeless.  Then a friend of mine in high school accepted Jesus.  I saw a peace and smile in her eyes and realized I was missing out.  It was then as a senior in high school, I recommitted to make Jesus Lord of my life.  I realized that my worth and value was not in others, or anything else in this world, but could only be found in the Lord. I made the decision to surrender all to Him and live my life for Him.

He brought me new friends, and gave me joy, peace and purpose.  I realized that when He died on the cross, it was to pay the price for my sins.  He gave me the free gift of salvation and abundant life; demonstrating that I am loved, someone worth dying for, valuable and beautiful in Him.

Songwriting began as an overflow from my intimate time spent with Jesus as I read His Word and prayed. I sensed Gods leading and went to The Ohio State University to major in Music Education. I then moved to Nashville as a songwriter with Meadowgreen Music, and later became an artist on the Benson label.

In 1989 I met a wonderful man, Gregg Jacobsen, who was attending the National Christian Business Conference in Nashville.  I was there to sing songs off my first album. After dating long distance, God showed me that he was the man for me to marry. Marriage has been wonderful and healing, as well as challenging, as we committed to love each other unconditionally and sacrificially because of Christ in our lives.  It is worth waiting for the right man and it’s important to love the Lord first!
I am grateful to the Lord for faithfully showing me more and more about His great and perfect love toward all His precious children.

My prayer is that God will continue to use the songs He’s given me to meet people where they are at and lead them to Him.  And that He would give me new insights as to who He is and how He loves, and that songs would continue to flow through me from that relationship.